skip to main | skip to sidebar

The Englishman Peter Crosthwaite, after a miserable stint in the family wool business, spent a number of years fighting off pirates on the East India Company gunboat "The Otter." After his tour of duty, he decided to settle down and found the Keswick Museum and Art Gallery. He also published maps. Perhaps feeling that he needed to enlarge his resume, he went on to invent, among other things, a cork-bottom lifeboat, a portable bathing machine, a swing purported to improve one's help, and a wind-operated harp. In 1785, he also discovered 6 stones that, when struck, produced perfect notes. Over the next six months, he scrounged up another ten, tuning them by chipping away at the rock. After assembling his set, he placed a system of mirrors near the museum window to help him spot carriages as they neared. He, his daughter, and his wife, would then begin a sonic assault that included gong, drum, barrel organ, and the stones, in the hopes that the passersby might stop in and pay a visit. The Keswick Museum and Art Gallery is currently ranked third on helium.com's list of The World's Strangest Museums.

This lithophone may still be viewed at the Keswick Museum and Art Gallery today.

It seems that if one does not want to be seriously outdone, one should devote more than six months to developing lithophones.

In 1790, stonemason, musician, and experienced musical inventor Joseph Richardson began developing his own collection after noting the musicality of certain rock from the Lakes District, eventually deciding that the Keswick rock was the most sonorous. This rock, the same kind used by Crosthwaite, is known as hornfels. Over the next thirteen years, he fashioned a set that spanned eight octaves, more stones than a piano has keys. Each stone was submitted to rigorous testing and shaping before it could be deemed worthy of the instrument. He was so monomaniacal about the project that he practically sent himself and his family to the poorhouse. In 1840, he named the completed lithophone, 'The Richardson Set.' Richardson and his sons began to play local concerts, and generally blow minds in the Keswick region. A three week tour of Northern towns turned into a three-year rock-tapping odyssey. A number of different effects were achieved by striking the stones with different methods. Apparently they were able to replicate flute, harp, organ, and piano, or, as a 1846 newspaper ad boasts, anything from the warble of a lark to the deep bass of a funeral bell. They played songs ranging from popular dances to pieces by the likes of Handel and Mozart. People lost it.

Never satisfied, Richardson decked out 'The Richardson Set' with swiss bells, two rows of steel bars, and even some kick drums. Thus was born the Rock, Bell, and Steel Band. After an initial command performance at Buckingham Palace, Queen Victoria invited back twice more. They toured Germany, France, and Italy and played over 60 concerts in London. Joseph Richardson and Sons and Rock, Bell, and Steel Band were preparing for a US tour when Robert, the youngest and most gifted son, died of pneumonia. The lithophone languished and was, in 1917, finally sent to join its sister instrument at the Keswick Museum and Gallery. 'The Richardson Set' is now famously known as The Musical Stones of Skiddaw. 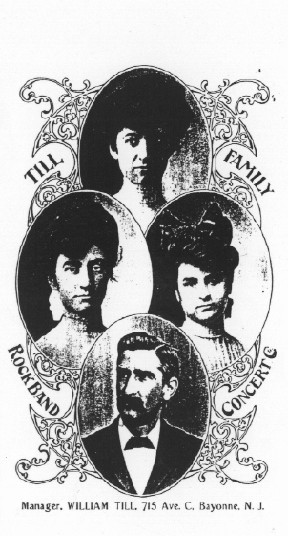 In 1881 The Till Family Rock Band began playing concerts in The Crystal Palace at Hyde Park, eventually playing a total of 136 shows there. Rocking out on a Skiddaw lithophone they dubbed the "harmonicon." It was eleven to twelve feet long, with a wooden frame. Five octaves of stone were supported upon straw rope. 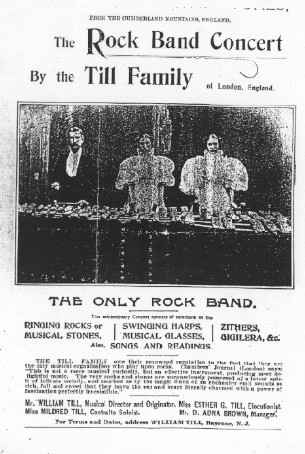 Here is an excerpt from a 1903 letter to Mrs. J. Crosby Brown from William Till.

These Musical Stones were gathered from the Cumberland Mountains of England by Mr. William Till, now residing in Bayonne, N.J. Mr. Till for many years explored the Palaeozoic rocks of the Cumberland Mountains and at length found a series, which, when struck, produce musical sounds. The Rocks are Gneiss and Hornblende Schist. Mr. Till commenced to collect these stones by way of amusement, and by the end of the year he had gathered enough to form an instrument of an octave and a half on which simple airs could be played. The idea of a perfect instrument followed as a natural sequence. Mr. William Till assisted by his father continued to work on it and devoted many years in completing the instrument, which is now in the possession of Mr. Till.

They accompanied the harmonicon with other instruments such as cello, violin, and even a version of the Aeolian Harp, invented by Peter Crosthwaite. They spent five years touring Canada and the US. Reportedly, they played over 8,000 concerts and never failed to show up for a gig. It is worth noting that the final configuration of this rock band included three women.

Brian Dewan of Catskill, NY recently composed seven pieces for The Musical Stones of Skiddaw. The stones were reassembled on a new frame; Dewan used 36 of the 60 stones. A concert was held lakeside and the amplified music of the stones drifted across the lake to Coniston village in the North of England. New pieces were performed at the Liverpool Biennial of 2006, backed by a Chinese Orchestra.

The stones went on to reach a vast audience via BBC Radio 4 and NPR. Additionally, the Keswick Museum and Art Gallery has teamed up with The University of Leeds to try and discover why hornfels has musical properties.

And now, at long last, here is Brian Dewan, along with Jamie Barnes, playing The Musical Stones of Skiddaw.

Hi Singing Hand, its Jamie here from Keswick Museum. Thank you for featuring our story.
Peter Crosthwaite opened his Museum in Keswick 1780 and it was known as Crosthwaite's Museum. This eventually closed in 1870 and in 1873 the Keswick Museum and Art Gallery was formed. We have three lithophones in our collection, including the Crosthwaite and Richardson sets. We have a new blog about the Musical Stones at www.musicalstones.blogspot.com and a new YouTube station at www.youtube.com/musicalstonestv

The Singing Hand is an exploration of under-appreciated and rare instruments, with an emphasis on the dreamlike and the handmade.